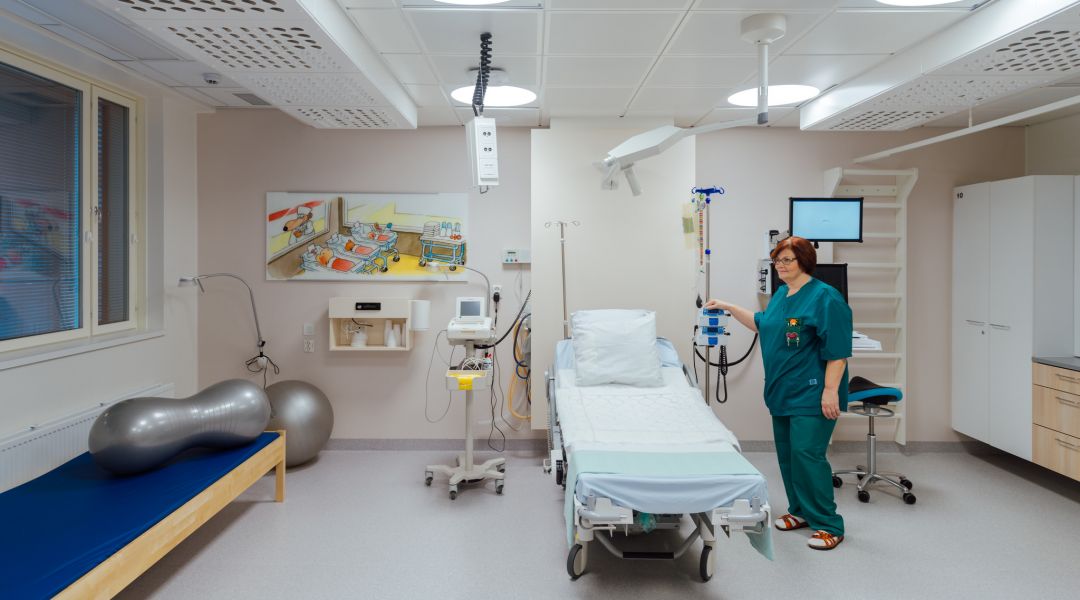 Renovation of the Women’s Hospital serves the whole family

The renovation and extension of section L of the Women’s Hospital on the Meilahti hospital campus was completed towards the end of 2016 and operations in the new premises began in March 2017. Hospital staff in particular were eagerly awaiting the renovation.

“The old premises were cramped and ergonomically poor, which caused problems. Some of the rooms did not have windows and they were difficult to move around in. For instance, bed positioning made it difficult to acknowledge nurse calls”, says midwife Jaana Runnakko-Koponen, who has worked at the Women’s Hospital for 30 years.

During the renovation, four delivery rooms and two observation rooms were active in temporary premises on the fourth floor. During hospital construction, the surroundings and the sensitive nature of operations posed their own challenges, but any adverse impacts were kept to a minimum. Particular attention waspaid to dust management.

“The day-to-day operations of the hospital continued to run smoothly. One of our midwives worked full-time on the site project. From time to time, completed premises were presented to us”, says Runnakko-Koponen.

The Women’s Hospital was upgraded to provide optimal service in deliveries, surgeries and intensive care for newborns. The hospital now has 22 delivery rooms. Six of these have a bathtub for water births. The modernised premises also have six observation rooms and three Caesarean section rooms. After the section is performed, the entire family enters the family recovery room. In the postnatal salon, is monitored the condition of the family before they go home or to the Perhepesä patient hotel.

“The new rooms are spacious and comfortable. All the equipment we need is close at hand. In our modern new premises, we can provide better maternity services to families, and also we professionals have a nicer environment to work in”, says the midwife.