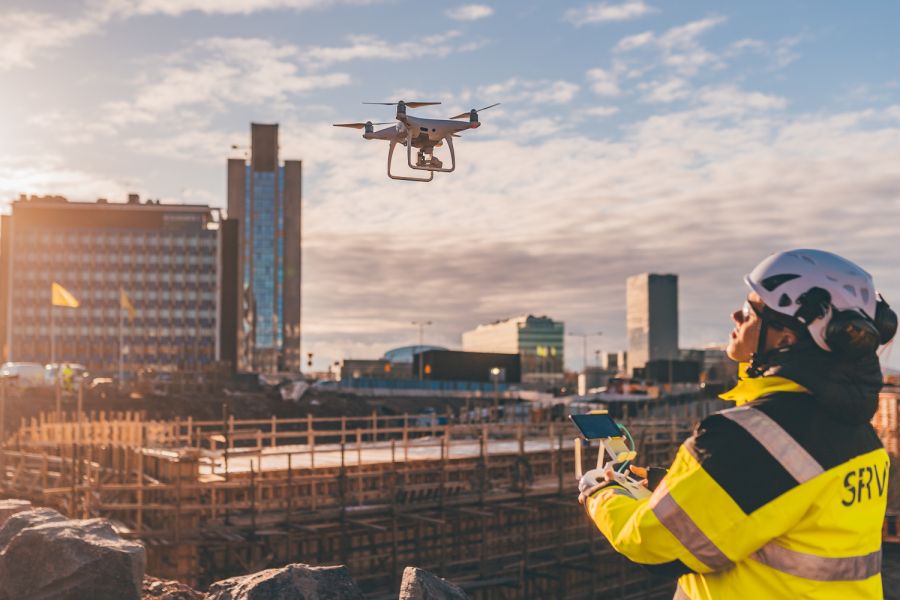 Off the Ground in Espoo

Once a month, the SRV Ring I work site in Keilaniemi, Espoo, experiences the thrill of flight. A hi-tech drone, equipped with a state-of-the-art camera, sets off to fly over the site – providing the builders with a unique bird’s eye view.

During its half-day flight, the drone covers the distance of about 300 metres, stopping at times to take hundreds and hundreds of pictures. Project Manager Olli Sihvola from SRV says that the drone has nine designated spots where it halts and hovers to take pictures – about 2,000 of them.

”Based on the pictures, we get a really good overview of the site,” says Sihvola.

After the drone has photographed the entire site, the images will be processed for 1-2 days. The end result: 360° panorama pictures and something called “point cloud material”. Sihvola explains:

”In our case, point cloud material is a cloud formed of 300 million points, every point with its own color and coordinates. This cloud forms a 3D model where you can measure distances between various objects with 10 centimetre accuracy.” The cloud is linked to Earth’s coordinates, too, so there is precise location information available.

Pretty as a Picture

”We have fresh images there, taken just prior to the meeting,” says Sihvola. “We know exactly what’s going on at the site and can plan accordingly.”

The aerial pictures assist in the decision-making: where should we put that temporary construction road or a driving ramp? “Point cloud makes it easy and quick to take measurements for these,” says Sihvola.

For instance, in the summer 2017 when support walls were needed on site, the basic data for their construction was derived from the picture data.

Sihvola says that panorama pictures are utilised more commonly within the organisation; point cloud – provided by company Pointscene – is used mostly by Sihvola alone. He says that point cloud is not that difficult to master once you get the hang of it, but the learning process does take time.

Here’s how it happens:

”For example, when a planner sends me the drawings for a concrete structure, I take the plans and put them on top of the point cloud. This way I can immediately see, if it is feasible to build.”

The company behind the drone is Tietoa Finland Oy which offers aerial photography as part of its visualisation services. The actual steering of the drone is performed by Tietoa’s Janne Hirvonen.

First flight at Ring I site took place in March 2017. “Pretty soon we moved into a routine where you do the fly-over and photos about once a month,” says Sihvola.

Sihvola expected that the drone could be useful, but he admits that the benefits have been bigger than he thought beforehand.

”Communication and understanding have improved a great deal, that’s for sure,” says Sihvola who has a lot of previous experience from BIM development.

”The goal is to utilise new technology and tools for improved performance.”