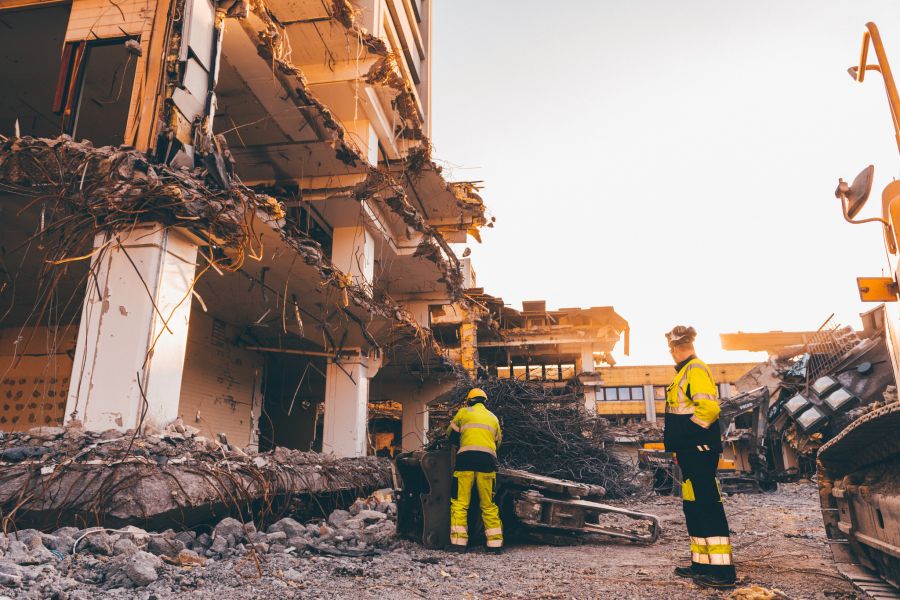 The Lapinmäentie project in Munkkivuori, Helsinki, took a major leap forward when the renewal of the block began in October with large-scale demolition work. The aim is to recycle 95 per cent of the demolition waste.

The old main building — Tower A and its foundations, which is known as the Pohjola Building — will be renovated. The other sections will be demolished, largely down to the cellar foundation slabs, while the retained sections, such as the swimming pool area, will be torn down to the park level. The total scope of this work is 45,000 square meter. Over the next years, seven residential towers will be erected on the plot.

The demolition works are expected to be completed in summer 2018. By then, around 130,000 tonnes of waste, such as concrete and bricks, will have been removed from the site.

“Demolition wastes are loaded into large lorry containers measuring 50 cubic metres — but even so, it will take more than 1,000 loads to transport it all”, say Design Manager Henri Nyroos and Project Manager Kimmo Hyry. “Other waste fractions will most likely amount to just under 20,000 tonnes.”

About 1,500 cubic metres of granite cladding will be removed intact from the facade. They will be used in the new facade of the remaining section and in the yard for gate construction”, says Nyroos.

Most of the demolition wastes consist of concrete and bricks, which are crushed and used in a variety of earthworks. At the beginning, it was assessed whether it would be possible to utilise demolition wastes on the site, thereby reducing the need for transport. However, plot logistics and scheduling posed problems. The area is cramped and does not have enough space to store the required amount of crushed material.

During the demolition process, the materials are sorted according to their further processing. Rebars are removed from concrete. The concrete material is pulverised, magnetically separated and loaded for transport. Hazardous wastes and asbestos are delivered to Päijät-Hämeen Jätehuolto Oy. Metals are recycled by Kuusakoski Oy, along with clean wood and construction wastes. The demolition contractor reports and submits transport documents to SRV on a weekly basis.

The story was originally published in 2017 Annual Report.