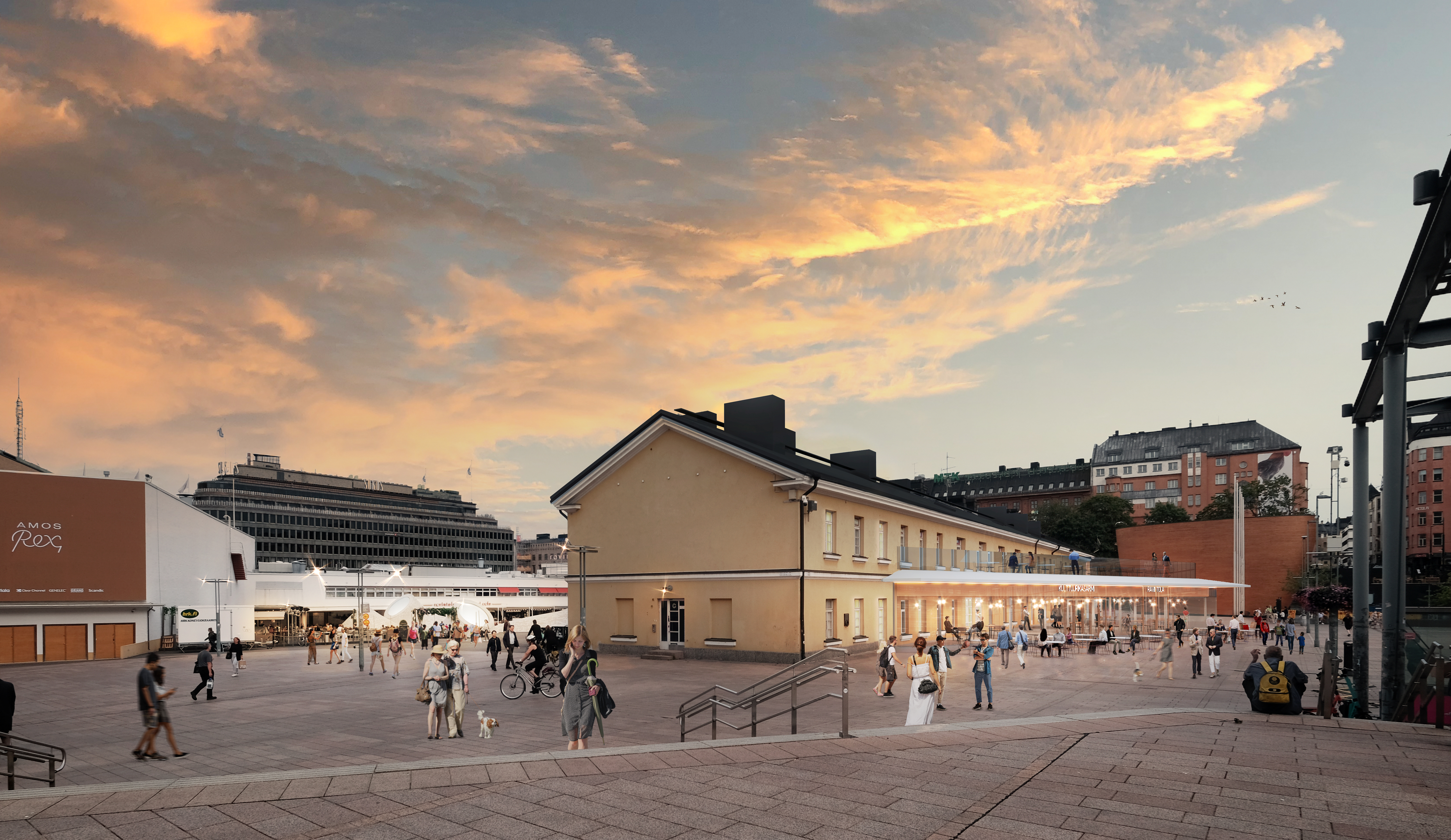 SRV and Föreningen Konstsamfundet r.f. have signed an agreement to build a unique entertainment centre called Kulttuurikasarmi, in Lasipalatsi Square in the Kamppi district of Helsinki. The project involves a basic renovation of Helsinki’s former bus station, and the existing building will also be extended with both underground areas and a glass pavilion to be built in Narinkka Square. The parties’ joint investment in the project will total about EUR 30 million, of which about EUR 19.5 million is the value of the project management contract. The project will be entered into SRV’s order backlog in August 2021. Project design and planning is already underway, with construction and renovation scheduled to begin in fall 2021. The new entertainment centre will be completed in 2023.

The existing building has had a long history since its completion in 1830. The building, which originally functioned as the service building of the Turku Barracks, is all that’s left of the barracks complex that burned down during the Civil War of 1918. The underground floor of the old building will be expanded with a new section extending under Lasipalatsi Square, and a glass pavilion will be built facing Narinkka Square. The building will end up having one underground floor, two overground floors and an attic, and its façades will be renovated and restored. The basic renovation will respect the building’s historical and architectural value. Sarc Architects will be responsible for the architectural design of the basic renovation. The building will have a final total area of 4,400 square metres and a volume of 20,800 cubic metres.

Kulttuurikasarmi will combine culture, art, concerts, events and good food. The building will be home to three new screens for BioRex Cinemas; the glass pavilion and a variety of restaurants and bars run by NoHo Partners; and a large indoor event space complete with terraces. An event stage will also be built in Lasipalatsi Square to enable a variety of performances and open-air concerts.

“We’re delighted to be involved in this project to liven up the cityscape. Kulttuurikasarmi in downtown Helsinki will be built right next door to one of our previous projects – the Kamppi Centre – and will combine our expertise in basic renovation and urban development in an excellent and broad-minded manner. We’ll be carrying out the basic renovation of a building of cultural-historical value with respect for its origins. At the same time, we’ll be creating a brand-new kind of lifecycle-wise urban structure in which we can make better use of the space surrounding the building, which is particularly valuable as the city becomes more densely built-up. We’ve previously carried out equally large-scale basic renovations and repurposing in other buildings, such as the University of Helsinki’s Think Corner and Kaisa House, and we’re currently refurbishing the Elanto Building in Hakaniemi and the Snellmania property at Unioninkatu 37,” says SRV’s Jouni Forsman, Senior Vice President, Business Premises, Helsinki Metropolitan Area.

“Konstsamfundet has made a long-term commitment to develop the Lasipalatsi block into a versatile oasis of urban culture right in the centre of Helsinki,” says Stefan Björkman, CEO of Föreningen Konstsamfundet r.f.

The project is backed by many well-known Finnish organisations and people: Föreningen Konstsamfundet r.f, NoHo Partners Plc, BioRex Cinemas Oy, and Ilona Studios Oy, in which Ari Tolppanen and many other seasoned film industry people are involved, including Mark Lwoff, Misha Jaari, Aku Jaakkola, Mikko Leinonen, Jukka Vilhunen and Pentti Molander. SRV will be responsible for the construction and Sarc Architects Ltd for the design of the Kulttuurikasarmi.

SRV is a developer and innovator in the construction industry. Our objective is a new lifecycle-wise reality where solutions related to construction ensure well-being, financial value and the benefit of users, residents and environment – for years and generations to come. Our genuine cooperation and enthusiasm for our work comes across in every encounter. Sustainability is reflected in all our activities.

Our company, established in 1987, is listed on the Helsinki Stock Exchange. We operate in growth centres in Finland and Russia. In 2020, our revenue totalled EUR 975.5 million. In addition to about 1,000 SRV employees, we employ a network of around 4,200 subcontractors.